2018 saw significant innovation in South Korean cinema. Korea made its first superhero blockbuster and financial crisis drama; it might also have a chance at winning this cycle’s Foreign Language Film Oscar (more on that later).

Amidst all this cinematic activity, you might ask: what are the Best Korean Movies of 2018?

After watching dozens of Korean films throughout 2018, we compiled this list of 11 films to give you an answer. Ranging across romances, action flicks, period pieces, and award-winning dramas—take a glance at the top Korean movies from 2018. 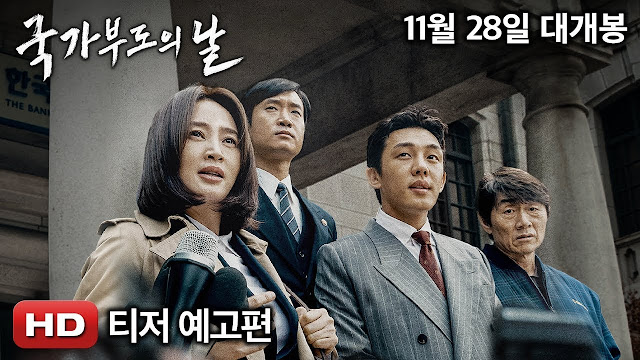 If you enjoyed the 2015 Hollywood movie The Big Short, or just have a passion for economics and politics, then Default will tickle your fancy. This K-movie dramatizes something many Koreans consider the most traumatic event since the Korean War: 1997’s Asian Financial Crisis.

Even if you don’t have an economics Ph.D.,  Default is worth watching. The movie actually focuses more on crisis’ human impacts, as opposed to technical details. This allows general audiences to empathize with the struggles of Koreans during this trying period.

In fact, Default did exceedingly well when it opened at the Korean box office. It topped the charts and garnered the biggest November opening that any Korean movie’s ever had. Korean audiences found the film really resonant, and audiences in Southeast Asia (who also experienced the 1997 crisis) and the West (who experienced the 2008 Global Financial Crisis) will find the film relevant too.

In The Witch: Part 1. The Subversion, director Park Hoon-jung weaves a complex narrative that centers around a high school student named Ja-yoon (Kim Da-mi) who lost all memories of her early childhood in a mysterious incident. When Ja-yoon enters a televised contest to win money for her struggling adopted family, shadowy figures start appearing in her life. This causes her to rediscover secrets about her past and self.

For big K-movie buffs, director Park Hoon-jung wrote the renowned 2010 horror/action movie I Saw the Devil. The Witch bears some similarities. Even though The Witch‘s protagonist is a teenager, the film contains gratuitous fight scenes and an overall dark ambience. However, The Witch is neither overly reliant on horror or gore. Instead, actress Kim Da-mi does quite a good job of portraying Ja-yoon as a nuanced character.

Heart-stopping action sequences, black comedy, and a hint of art house technique—that’s one way to describe Believer, one of this year’s most entertaining Korean action/crime movies. A remake of Hong Kong’s Drug War, Believer follows a anti-narcotics detective (Cho Jin-woong) who partners with a revenge-driven gang member to take down Asia’s biggest drug lord.

While Believer isn’t a particularly emotional film (hey, it’s action, what do you expect), it’s surprisingly complex in other ways. A pulsating, modern soundtrack complements beautifully shot scenes of gunfights, fistfights, and explosions; well-timed plot twists keep your attention to the very end.

More a fan of romances or melodramas? Don’t worry, we have you covered with Be With You, one of 2018’s more notable Korean romances. Admittedly, Be With You‘s plot isn’t particularly original; the movie’s a remake of a 2004 Japanese movie with the same name. However, actor So Ji-sub and actress Son Ye-jin lend their star power to this Korean adaptation, earning the adoration of many viewers.

In Be With You, Son Ye-jin plays a wife who promises to return to her husband (So Ji-sub) a year after she dies. She somehow keeps this promise, though their reunion comes with some caveats (i.e. all her memories are gone). Audiences across Asia highly appreciated the movie’s purity and portrayal of true love persisting in spite of all odds. However, be warned: Be With You is a real tearjerker!

7. Keys to the Heart 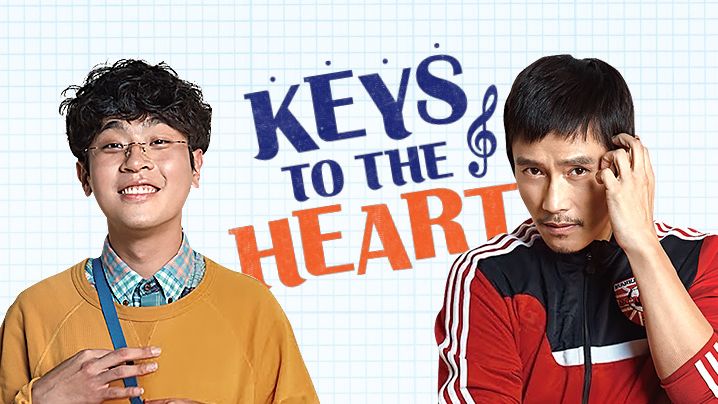 Looking for a more family-centric film? Check out Keys to the Heart, which is one of the most heartwarming Korean movies of 2018. In this film, Lee Byung-hun plays a down-on-his-luck boxer who returns home to live with his brother (Park Jung-min), an autistic savant who’s talented at playing piano and video games.

Though Lee Byung-hun is often known for his action prowess and chiseled jawline, he leverages his considerable acting talent quite well alongside Park Jung-min. Keys to the Heart ends up sensitively depicting the intricacies of family relationships, and provides an emotionally rewarding journey for all viewers. 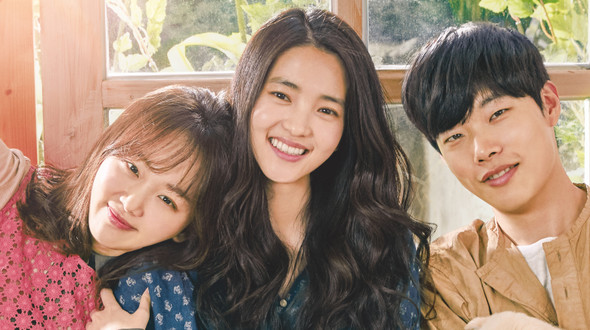 Another heartwarming member of our list is Little Forest, starring Kim Tae-ri (of The Handmaiden and Mr. Sunshine). Kim plays a young woman named Hye-won who returns to the countryside after a failed attempt at city life. Across four seasons, we see Hye-won rediscover the simple pleasures of life (and cook a lot of tasty Korean food).

Lacking villains, conflict, or tension, Little Forest provides a refreshing break from the pressures of everyday life. It’s a light romp through beautiful natural scenery, and its four act (for four seasons) structure is very easy to follow. If you want an escape from the doom, gloom, and weightiness elsewhere on this list, watch Little Forest. 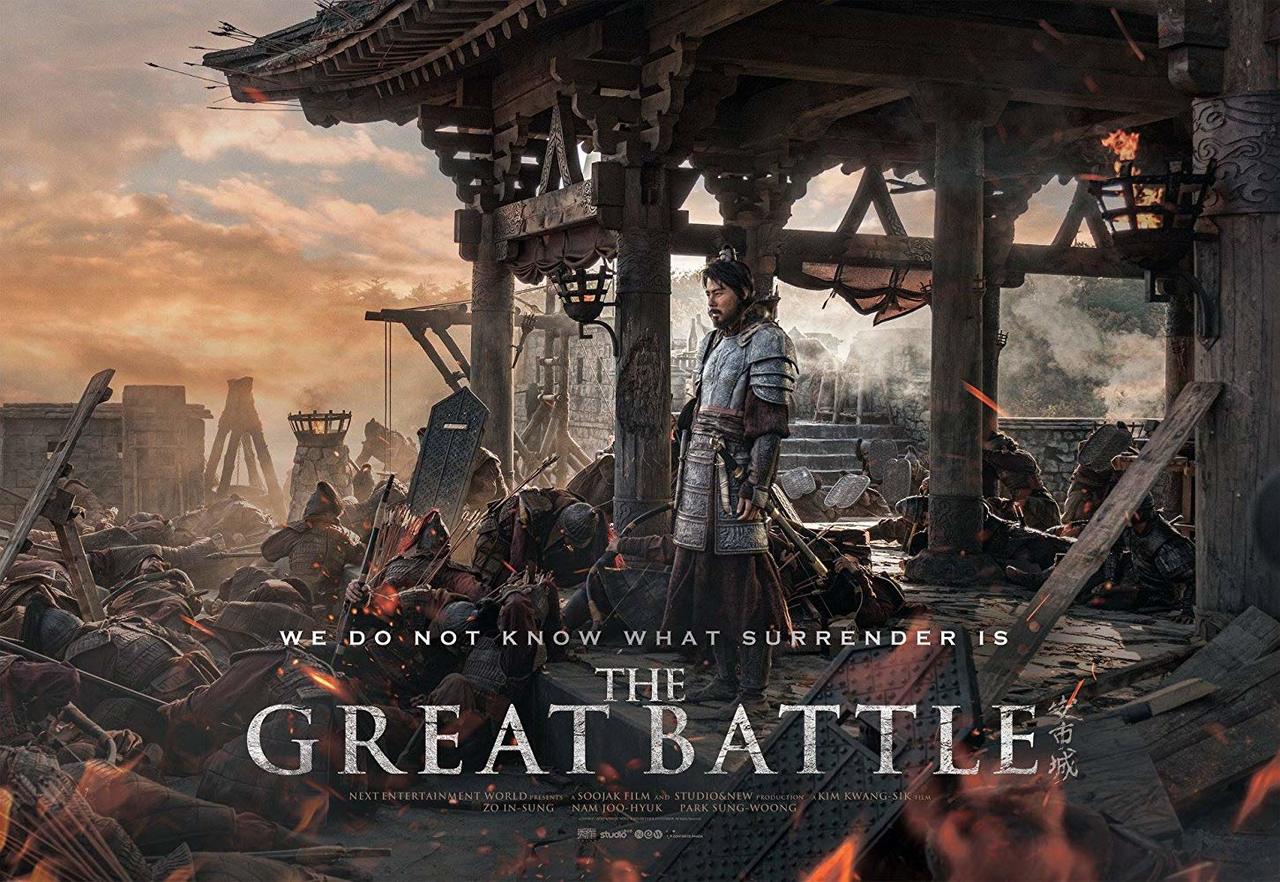 Epic historical action movies have always done well at the Korean box office (ex. The Admiral: Roaring Currents). 2018’s The Great Battle is no exception. As the title suggests, The Great Battle is about a great battle… specifically, the Siege of Ansi Fortress in 645 CE. During this siege, Goguryeo (an ancient Korean dynasty) forces defended a major fortress against hundreds of thousands of Tang Chinese troops, saving the Korean peninsula from invasion.

While The Great Battle doesn’t get all the historical details right (ex. there’s some suspiciously attractive female blowgun operators), it’s  exceptionally entertaining overall. The movie deftly portrays the Koreans’ strategic thinking, pairing it with sweeping action sequences on par with those in movies like Lord of the Rings (albeit with a Korean twist). 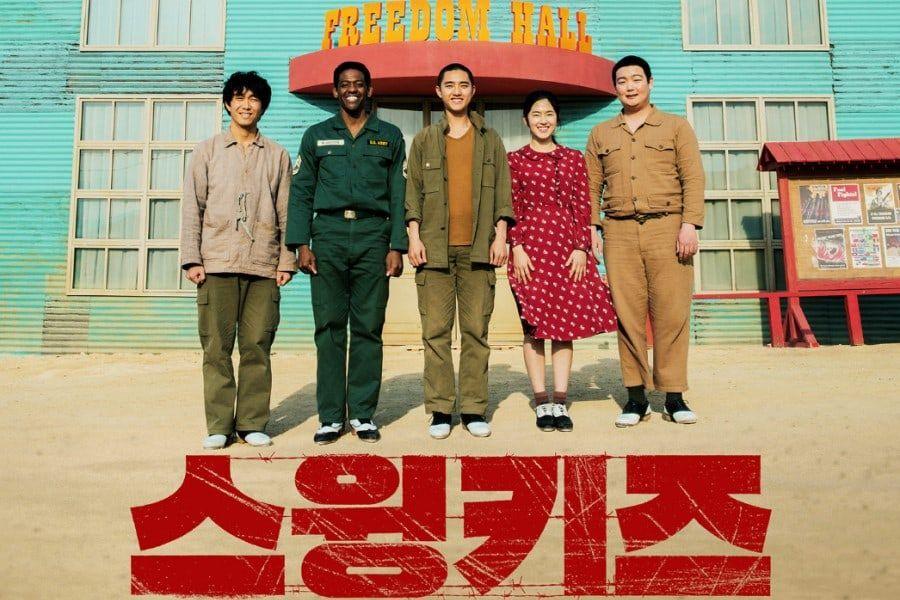 Released in mid-December 2018, Swing Kids was a late and charmingly unexpected addition to our list. Billed as a musical drama, Swing Kids also incorporates significant historical and social context.

Do Kyung-soo (popularly known as D.O.) of the hit boy band EXO headlines the film as a hardheaded North Korean soldier named Ro Ki-soo, who’s imprisoned in the infamous Geoje POW Camp during the Korean War. To calm the restless POWs, camp authorities order an African-American soldier to organize a tap-dancing group. Ro, along with several other prisoners, join the group and find new purpose in dancing.

Beyond well-choreographed dance numbers, Swing Kids also comments on the brutality of war and racial tensions. The POWs at Geoje have differing ideologies, and their African-American adviser contends with racism from his white superiors. With a genre-defying approach that makes you want to dance along one moment and cry in the next, Swing Kids may live on as a classic alongside 2005’s off-kilter Korean War hit Welcome to Dongmakgol. 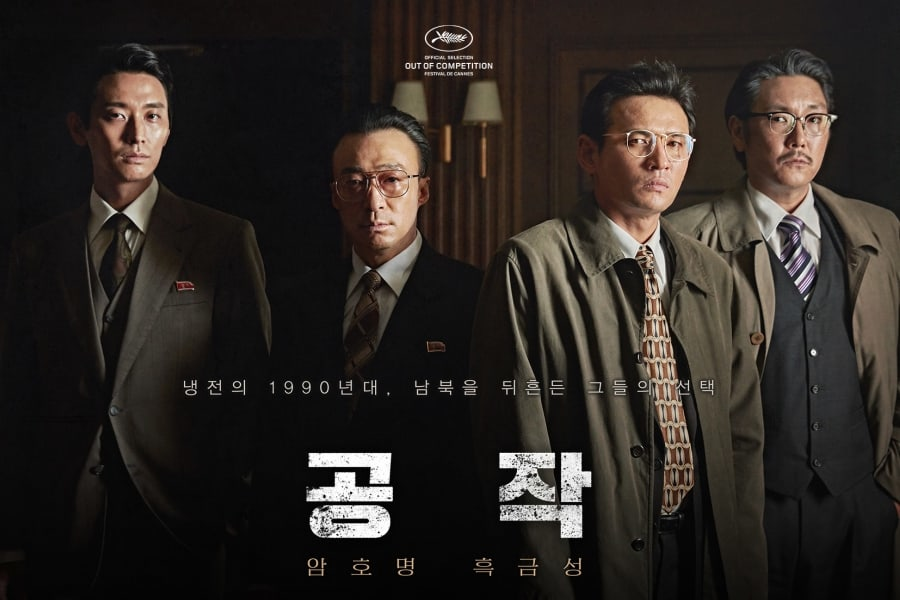 Negotiations with North Korea? Check. Election interference? Check. The Spy Gone North is the most relevant and compelling spy movie of 2018 not just in Korea, but maybe also worldwide.

In The Spy Gone North, veteran actor Hwang Jung-min plays a South Korean spy codenamed “Black Venus”. In the movie, Black Venus must infiltrates North Korea to gather intelligence about its nuclear program. As it turns out, Black Venus is based on a real spy from the 1990s—you can read more about the real story behind The Spy Gone North in our full length review.

The film premiered not long after the April 2018 inter-Korean summit and the inaugural US-DPRK summit, which likely helped it do quite well at the box office. Besides great release timing, the movie had great attention to historical details, and keeps you at the edge of your seat with dramatic tension. If you have any interest in Korean politics, North Korea, or spy movies—add The Spy Gone North to your list. 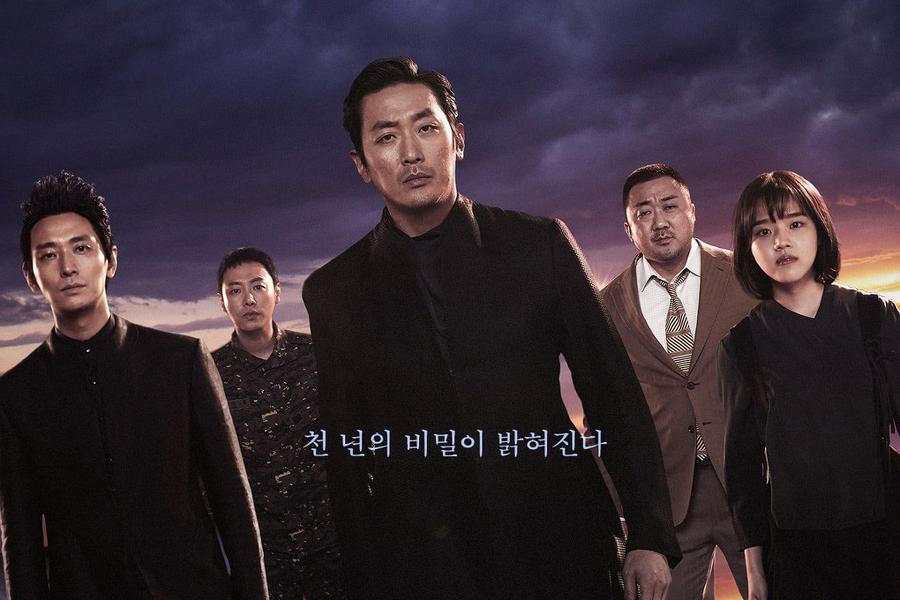 Any list of the best Korean films of 2018 would be incomplete without Along with The Gods: The Last 49 Days, which is the sequel to December 2017’s Along with the Gods: The Two Worlds. Filmed simultaneously, these two movies utterly dominated Korea’s box office. The Two Worlds is the second-most viewed Korean movie ever, and Last 49 Days was the highest grossing Korean film of 2018.

In this fantasy epic, three afterlife guardians (Ha Jung-woo, Ju Ji-hoon, and Kim Hyang-gi) must guide a deceased man through various trials in the underworld. Along the way, the guardians meet a god (Ma Dong-seok) who uncovers secrets from their ancient pasts.

49 Days picks up right after the end of The Two Worlds, and offers more character development than the latter film. The star-studded cast of 49 Days give a highly charismatic performance which, coupled with sweeping action scenes, make this an immensely fun movie.

Topping our list of 2018 K-movies is Burning. Both artistic and entertaining, it’s likely to earn a significant place in Korean film history, alongside classics like Oldboy.

Adapted from a Haruki Murakami short story, Burning documents the interactions between three young Koreans: Jong-su, Hae-mi, and Ben. At the film’s start, Jong-su (Yoo Ah-in) bumps into Hae-mi (Jeon Jong-seo), a childhood friend from his rural hometown Paju. The two grow intimate but, after an extended trip to Africa, Hae-mi returns with a mysterious boyfriend named Ben (Steven Yeun).

Country bumpkin Jong-su is no match for cosmopolitan Ben. Besides competing for Hae-mi’s affection, the two embody different poles of Korean society. An aspiring writer, Jong-su tries yet fails to escape from the socioeconomic despair of his rural upbringing. On the other hand, with his immaculate yuppie skin and posh Gangnam apartment, Ben feels like a Korean Patrick Bateman. When asked what he does for a living, Ben dismissively answers: “I play.”

Hae-mi herself is idiosyncratic in some Murakami-esque ways, yet also quintessentially Korean in others (“I’ve had plastic surgery,” she bluntly admits). A mime-in-training one moment and a tall tale teller in another, she compels the viewer to question reality.

In 2019, South Korea maintained its status as East Asia’s cinematic powerhouse. Beyond a certain film that gained unprecedented international buzz (keep reading if you don’t know which), Korean cinema produced over 150 features during the year. Out of all …