2017 was quite an eventful year for South Korea, with the ascension of new liberal president Moon Jae-in, rising tensions with North Korea, and more. You could say the same for South Korean cinema — there’ve been quite a few great Korean movies that have come out in 2017. 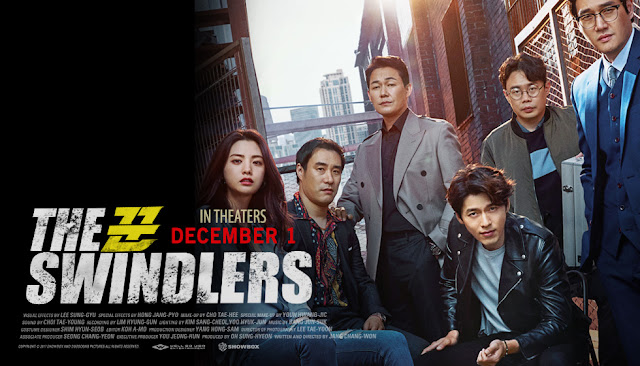 In this slick heist film, Yoo Ji-tae stars as a prosecutor named Park Hee-soo. Prosecutor Park teams up with a forger (played by Hyun Bin) and a motley crew of other scammers (including a character played by Nana from Orange Caramel) in an attempt to chase down a master con artist. Elaborate multi-layered deceptions, fast-paced action, and a captivating battle of wills ensues. The Swindlers was the seventh highest grossing South Korean movie of 2017. 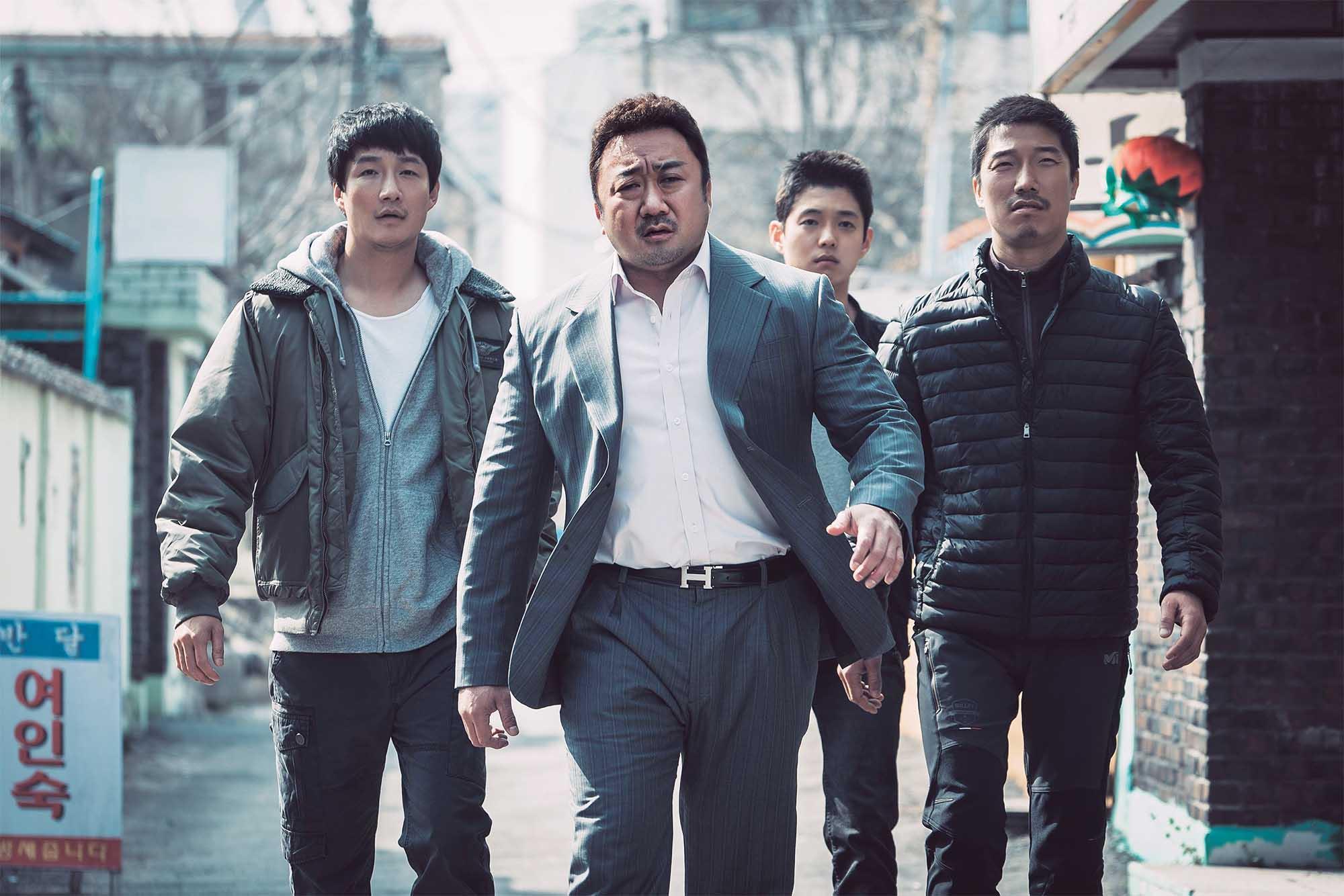 You might remember Ma Dong-seok as the big buff guy protecting his girlfriend in Train to Busan. Well, if you want to see more of Ma’s action, then you’re in luck with The Outlaws. In this action-packed gangster movie, Ma plays the lead character, a cop in Seoul’s police force. Inspired by an actual incident in 2007, The Outlaws traces how Ma’s character uses his fighting skills to bring down a nasty Korean-Chinese gang plaguing Seoul. The Outlaws was the third-highest grossing South Korean movie of 2017. As you may know, here at Cinema Escapist have a soft spot for politically or socially important films, especially from Asian countries. 1987: When the Day Comes is exactly one of those movies.

If you’re familiar with South Korean history, 1987 is a very important year–it marks the country’s transition to real democracy. 1987: When the Day Comes is based on the true story of Seoul National University student activist Park Jong-chul, whose torture sparked mass protests that eventually snowballed into the momentous changes of 1987.

With a star-studded cast, the film chronicles the efforts of several pro-democracy figures to uncover the authorities’ cover-up of Park’s torture. Don’t be turned off by the fact that this is a political/historical movie. It feels a lot like a murder mystery or conspiracy thriller, and has a rather fast pace.

Popular drama actor Ji Chang-wook headlines Fabricated City, which is directed by Park Kwang-hyun of the massively popular Korean War comedy Welcome to Dongmakgol. In Fabricated City, Ji plays a pro gamer who’s framed for the rape and murder of a high school girl. To clear his name, Ji teams up with a hacker and another gamer on a journey that takes them across both the real and virtual worlds.

This movie hits another one of Cinema Escapist‘s favorite topics: South Korean movies that feature North Koreans. In Confidential Assignment, Hyun Bin stars as Im Cheol-ryung, a North Korean special investigations officer who’s out for revenge after a rogue officer killed his wife.

When a special North-South summit occurs in Seoul, Im is dispatched on a secret mission to capture the rogue officer (who’s peddling superdollars to the mob)… but must contend with Kang Jin-tae (played by Yoo Hae-jin), a bumbling South Korean cop assigned to be his minder.

The plot of Confidential Assignment is admittedly a bit tired, but the action is top notch and makes up for that. Plus, Yoona of SNSD plays a supporting role with more screentime than expected, which I’m sure will bring delight to many viewers. 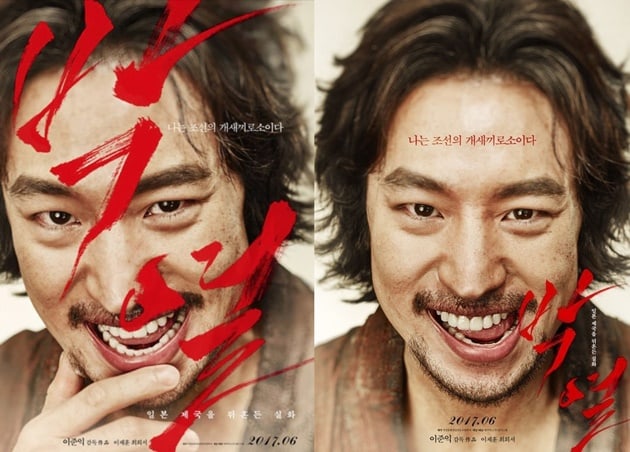 I put this film on the list since it’s one of the more entertaining and comedic Korean movies that covers the Japanese colonial period. Lee Je-hoon does a great job of playing an off-kilter Park Yeol, and Choi Hee-soo does quite admirably as Kaneko Fumiko, Park’s lover and fellow anarchist. The film is also directed by Lee Joon-ik, who directed the highly popular 2005 Joseon-era movie King and the Clown.

Midnight Runners was the fifth-highest grossing South Korean movie of 2017. Park Seo-joon and Kang Ha-neul play a pair of police cadets who embark on an amateur investigation that achieves results… comedically.

One of the more lighthearted Korean movies to come out in 2017, Midnight Runners provides a great balance between action and comedy. It doesn’t get rowdy like many American cop movies, but it’s plenty entertaining nevertheless. 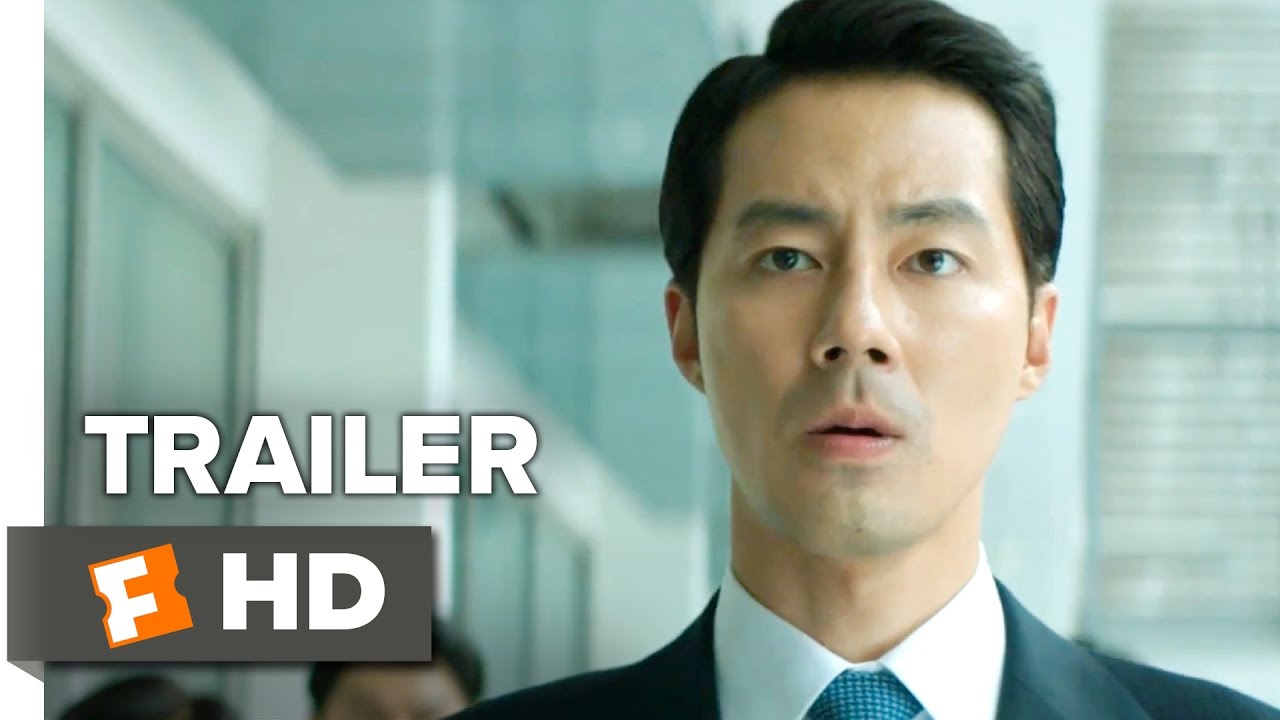 So… are you tired of seeing prosecutors in South Korean movies and dramas yet? Well, clearly Korean moviegoers aren’t, because The King is a movie all about prosecutors.

However, everything changes when he meets high-ranked prosecutor Han Kang-sik (played by Jung Woo-sung), who heads a clique of super-prosecutors. In Han’s clique, power, money, and sex abound — you just have to do what Han says, and be willing to twist your morals a bit.

The sixth-highest grossing South Korean movie of 2017, The King offers an entertaining but also thoughtful look at corruption in South Korea. It feels a lot like The Wolf of Wall Street in many moments.

Steel Rain couldn’t have come at a better time. Now that tensions with North Korea are at an all-time high, this movie is highly relevant — the characters of Steel Rain are tasked with preventing nuclear war on the Korean peninsula.

When a coup breaks out in North Korea, North Korean intelligence agent Um Chul-woo (played by Jung Woo-sung) must team up with a South Korean spymaster (played by Kwak Do-won) to defuse the situation and prevent their two countries from bombing the hell out of each other.

There’s an twist — the meddlesome Americans have threatened to intervene (with little regard for Korean life) if the two Koreas don’t sort their crap out in time. Hm… I wonder what real world parallel there might be here.

This is one of the most epic Korean reunification-themed movies we’ve seen in a while, perhaps on par with the movie Shiri — the pioneer of this genre. 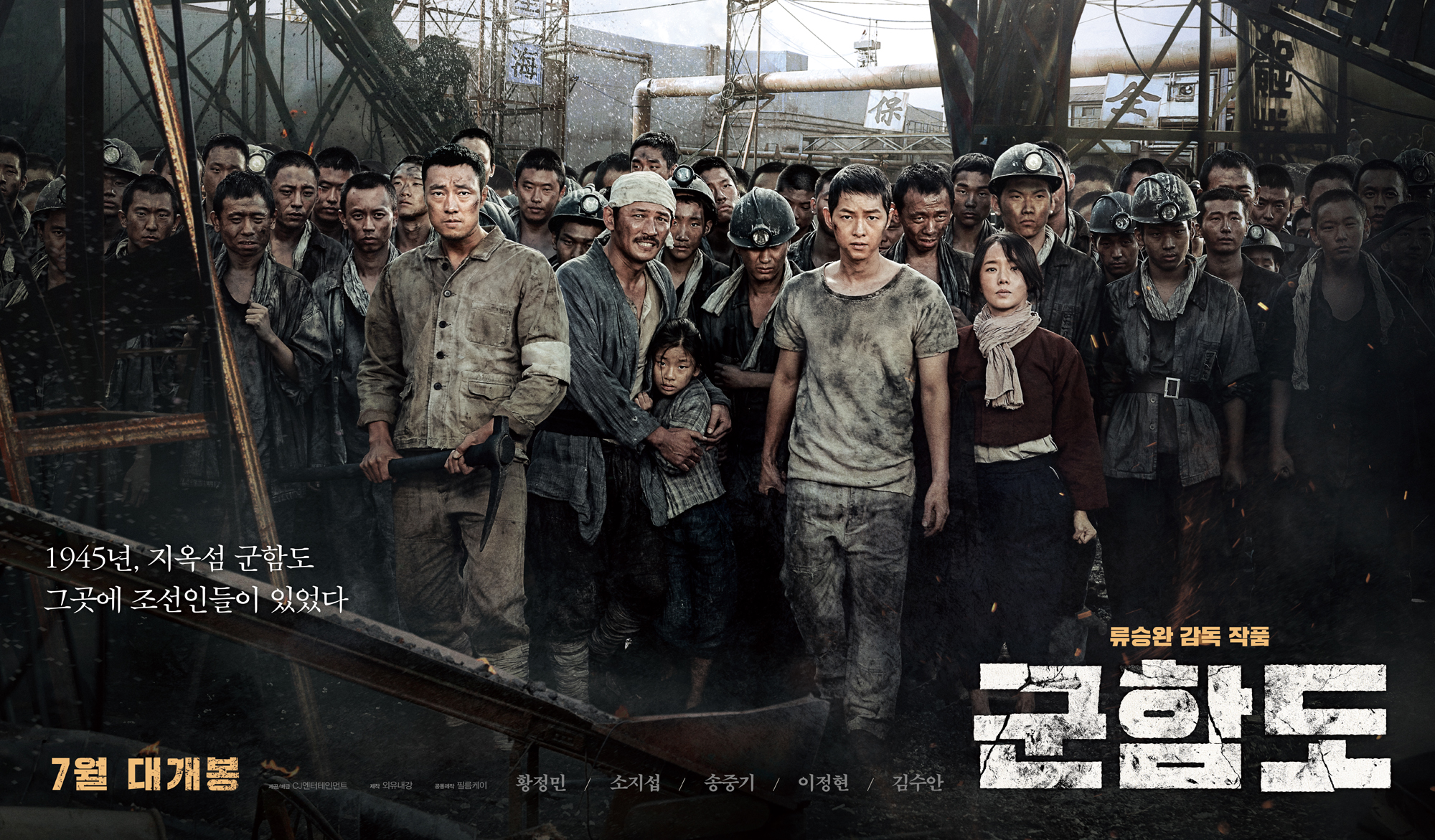 Remember that creepy island in the James Bond movie Skyfall? Well, it’s actually a real place called Battleship Island, off the coast of Nagasaki. During WWII, the Japanese forced thousands of Koreans to work on the island under appalling conditions. This is something that still causes Japan-Korea tensions to this day.

The 2017 movie Battleship Island is a highly dramatized account of Korean life on the real-life Battleship Island. Hwang Jung-min (from Ode to My Father) stars as the main character, a musician who’s forced to work on the island. As WWII winds down, the Koreans on the island must band together and escape from their Japanese captors.

Battleship Island came in fourth at the 2017 Korean Box Office, and it’s easy to see why. You not only learn about an important part of Korean history, but also see a huge amount of action.  I can’t emphasize the action enough… there’s a LOT of fighting. 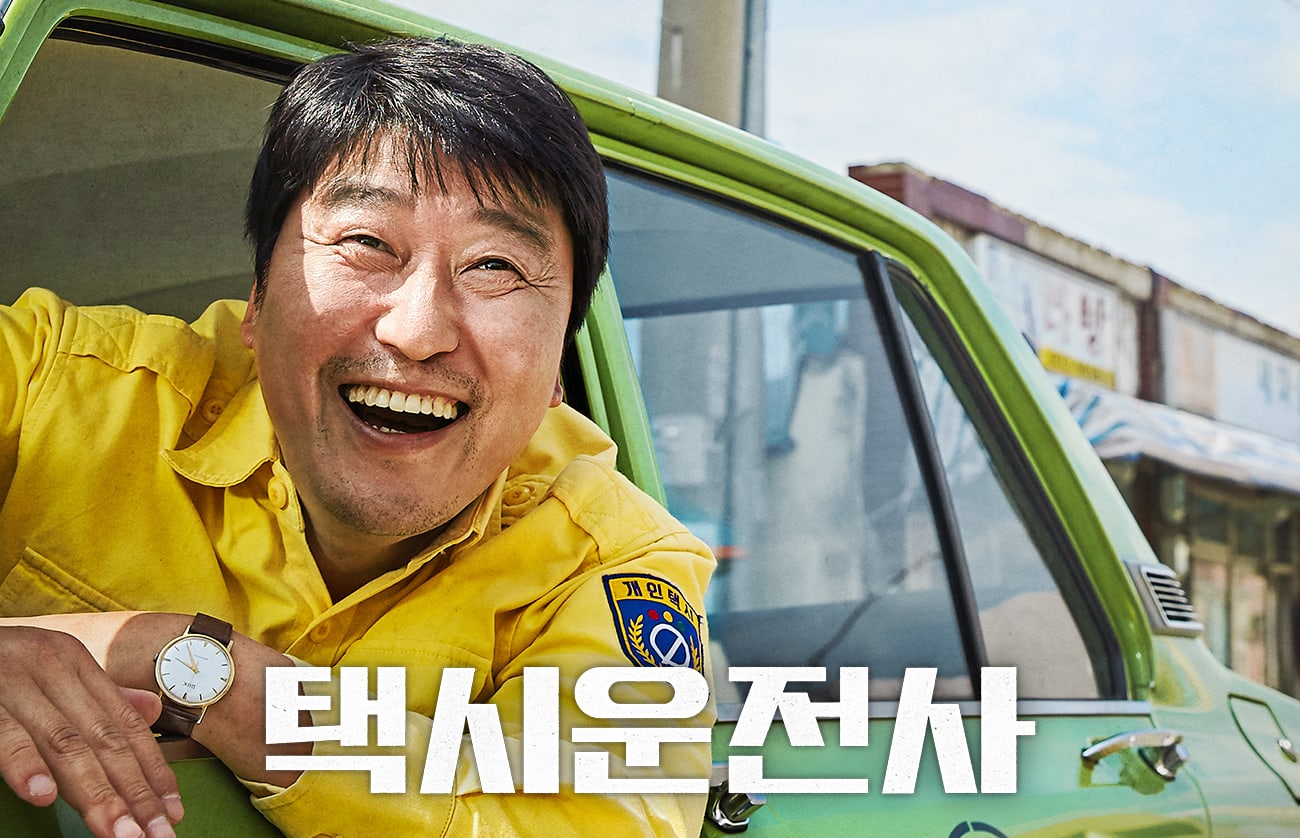 Our top Korean movie of 2017 is A Taxi Driver — which also happens to be the highest grossing movie in South Korea for the year. However, this isn’t just some thoughtless Transformers-like blockbuster. A Taxi Driver is not only entertaining, but also highly important to Korean society and history.

A Taxi Driver is based on the true story of a taxi driver who drove a German reporter through a military blockade to cover the 1987 Gwangju Uprising. For context, the Gwangju Uprising is probably the most important event in South Korea’s democratization.

In A Taxi Driver, veteran actor Song Kang-ho plays the eponymous driver, and Thomas Kretschmann (also in Stalingrad) plays the German reporter. The two get off to a rocky start, but soon realize that more beyond their selfish desires are at stake. A Taxi Driver is full of great dramatic moments that make you empathize with the characters. Oh, it has its fare share of action too.

2018 saw significant innovation in South Korean cinema. Korea made its first superhero blockbuster and financial crisis drama; it might also have a chance at winning this cycle’s Foreign Language Film Oscar (more on that later). Amidst all this cinematic …